Living In the Shadow of Your Predecessor 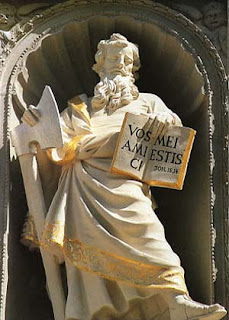 During my 25 years of ministry in the Episcopal Church, I served in two long-term positions: one for 10 years as Rector of a large parish; another for 11 years as Regional Missioner of three small parishes. Though I've never spent a lot of time thinking about it, I've wondered from time to time what it was like for my successors in those places. What did they hear from parishioners about my tenure there? Was there overall satisfaction, or disappointment? What did folks criticize most about my time there? What were the deficiencies and lacks in ministering to the parishes which I either missed, overlooked, or simply denied? It's never easy, I think, to follow the tenure of a predecessor, to avoid being compared, to gain acceptance for one's own merits.

Woodeene Koenig-Brickers writes this, reflecting on St. Matthias, Apostle, in her book 365 Saints: "It's difficult enough to try to live up to your predecessor's glorious reputation, but it's even more difficult to have to live down a bad one. St. Matthias had that problem. The only thing we know about him is that he was chosen to take Judas Iscariot's place among the twelve apostles. Imagine going through history known as the one who replaced Judas. No matter what Matthias did, the first thing people were bound to remember was that he took over from the person who betrayed Jesus..."

For centuries, according to Fr. Pius Parsch, Matthias wasn't accorded full honor as an apostle because their number of 12 was rounded out by St. Paul, who consistently introduced himself to communities in Asia Minor as "...Paul, an apostle of Christ Jesus by the will of God..." Matthias was named among other "apostolic men", such as Stephen and Barnabas, and only made it to the second grouping of saints in the Roman Canon, rather than the first. It was Pius V, who was Pope from 1566-1572, who finally gave Matthias' feast a vigil and placed him in the same category as the other Apostles. Pius V was a Dominican, a patron of the great composer, Palestrina, and, no big surprise, canonized St. Thomas Aquinas, another noted Dominican.

Matthias, as noted above, was chosen to replace Judas the Traitor, after Christ's ascension and during the time the Apostles were preparing for the promised coming of the Holy Spirit. As with so many of the early saints, we know practically nothing about them, except for the pious legends which have been handed down to us. Supposedly, Matthias traveled to "distant lands", sowing the seed of God's Word, possibly in Ethiopia. St. Clement of Alexandria (c. 150-c. 215) has left us one sentence in his writings: "[Matthias] exhausted his body by mortification to make his spirit subject to the Crucified."

Matthias is said to have died a martyr's death, and is often depicted in art with a large axe, as in the photo above, from St. Matthias Benedictine Abbey in Trier, Germany, where the relic of his head is ensconced. Legend has it that St. Helena, the Empress, brought a portion of his other relics to Rome where they're venerated in the church of Santa Maria Maggiore, where, coincidentally, Pope Pius V rests.

Woodeene Koenig-Bricker's final advice to "successors": "The best -- and only -- thing we can do when we're faced with that situation is to focus our attention on the task at hand. We can't change what the person who had the job before us did or didn't do. All we can control are our own actions."
Posted by Harry Allagree at 11:39 AM