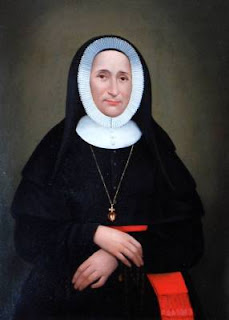 Maria De Mattias was born in Vallecorsa Italy to a religious and upper class family which valued education. She was the second of four children born to Giovanni de Mattias and Ottavia de Angelis. Although women during her time did not receive a formal education, Maria nevertheless learned to read and write. In her midteens, she was withdrawn and focused more on her looks than on religion. But at age 16 she began a spiritual journey, inspired by a mystical vision which she'd had.

The great Roman missionary of the Precious Blood, St. Gaspar del Bufalo, visited her town in 1822. As Maria listened to his sharing of God's Word, she decided that she needed to devote her own life to teaching and spreading the Good News. On March 4, 1834, under the guidance of her spiritual director, Fr. Giovanni Merlini, also a missionary of the Precious Blood, she founded the Congregation of the Sisters Adorers of the Blood of Christ at the age of 29. During her lifetime, the order established over 70 communities in Europe. Maria died in Rome on August 20, 1866 at the age of 61 and was buried in Rome’s Verano Cemetery through the good graces of Pius IX.  She was declared Blessed in 1950 by Pope Pius XII, and was as a saint of the Church on May 18, 2003 by Pope John Paul II. 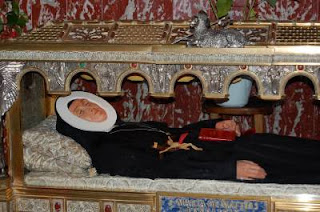 St. Maria de Mattias wrote: "For the triumph of his mercy and to show his infinite love for us, our divine Redeemer Jesus Christ shed all his precious Blood with great suffering and humiliation, as price of salvation and of glory. He gave it all, he gave it for all, and he does not stop giving it...This lowly Congregation which lives and labors under the glorious title of the most precious Blood of Jesus Christ must itself take on the shape and pattern of a living image of that divine love with which it was shed, and of which it was and is symbol, expression, measure and pledge. The spirit of this holy work is all love. We have carved this word in our minds and on our hearts. I repeat: Love! Love toward God and our dear neighbor...What a beautiful consolation it is to see spouses of the divine Lamb, the Adorers of his most precious Blood, motivated by one sole will, the will of God, forming but one heart and one soul, and thus unite, making the heavens resound with a hymn of thanksgiving to the infinite goodness of God, while at the same time they offer the Blood of his Son for the reconciliation of heaven with earth, of earth with heaven..."
Posted by Harry Allagree at 12:22 PM