The Sibling With The Greater Love 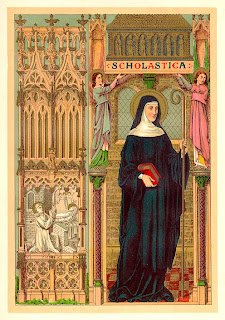 St. Benedict of Nursia was no slouch when it came to loving God. His biography is filled with stories about God's special favors granted at his intercession. Nevertheless, St. Scholastica, his sibling and possibly twin sister, seems to have had a bit of an edge, at least according to Gregory the Great in his Dialogues. As a young man, Benedict had run off to become a hermit at Subiaco, later moving to Monte Cassino, when Scholastica was very young. Surely she admired and was influenced by the commitment and holiness which she saw in her big brother. Still at home, she consecrated herself to God, the implication of that being that she must even then have exhibited an advanced degree of love of God.

Gregory relates the oft-told story of Benedict's last meeting with Scholastica before she died. Since her nunnery at Plombariola was located only about five miles from Monte Cassino, Scholastica and Benedict annually visited with one another at a gatehouse outside Benedict's monastery where they would pray together and converse about holy things. Scholastica's health had been failing at the time of the visit about which Gregory the Great wrote, and perhaps she had an intuition that this could be the last time she and Benedict would be together here on earth. She obviously wanted to make the best of it.

Along with Benedict's companions, Scholastica and Benedict had spent the day singing praises to God and talking about the spiritual life. As darkness was settling in, they continued their dialogue over a meal together until it grew quite late. Scholastica, realizing this, begged Benedict and the others to stay the night. Benedict, not one to transgress a Rule he himself had written, reminded his sister that that wasn't possible because they weren't to be away from their monastery overnight. Whereupon Scholastica quietly folded her hands on the table, resting her head on them, and fell into deep prayer. When she finally looked up, a clap of thunder startled the group, and torrential rains began to fall.

Benedict was immediately savvy as to what had taken place. "God forgive you, sister, what have you done?"Her innocent reply was, "When I appealed to you, you would not listen to me. So I turned to my God and he heard my prayer. Leave now if you can...go back to your monastery." A typical sibling squabble! And one might imagine Scholastica's coy smile. Benedict, of course, knew that he'd been "had", not only by his little sister, but also by the God whom they both loved so selflessly. One can only wonder about the deep things of the spirit which they must've discussed for the rest of the night. Whatever it was, Gregory the Great notes that "both of them derived great profit from the holy converse they had..."

Gregory, however, seems unable to let Scholastica's action and words simply go by without further comment: "We need not be surprised that in this instance the woman proved mightier than her brother. Do we not read in St. John that God is love? Surely it is no more than right that her influence was greater than his, since hers was the greater love." Turns out that both she and Gregory made the right call, for only three days later Scholastica died. Benedict is said to have seen her soul entering heaven in the form of a dove. He had his brothers go down and fetch her body and, after the funeral rites, had them bury his beloved sister in the tomb which he had prepared for himself. Gregory concludes with a final observation: "The bodies of these two were now to share a common resting place just as in life their souls had always been one in God."
Posted by Harry Allagree at 12:13 PM