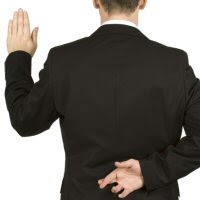 You've probably all seen the Peanuts cartoon where Lucy holds a football for Charlie Brown. Each year she holds it, and each year she jerks the ball away just at the last minute before Charlie tries to kick it. In one episode Lucy assures Charlie Brown: "I know you fell down last year. But this year I cross my heart that I won't do it..." Of course, we all know what happens: she pulls the ball again. When Charlie Brown complains, she replies: "Yes, I said 'cross my heart', but I didn't say 'and hope to die'"!

The problem here is that Lucy seems not to feel that oaths are binding. You and I know people who haven't been true to their word to us, who've outright lied to us or have been less than candid. When I was in sales work years ago and would call on a prospective client, I'd often be told, after the sales pitch: "Give me a call next week and then we can do business." Next week, of course, you could never reach the person, or you were told the person was no longer interested. Same thing with family, friends or acquaintances: parents sometimes manipulate the truth by replying to children's requests, "We'll see." All of this can leave a person feeling cheated and betrayed.

It's not a new problem. By Jesus' time the use of oaths and empty promises had become somewhat commonplace. An oath can be described as that by which a person invokes God to attest to or witness to the truth of what one says. Often a sacred object is substituted for God's name: "I swear on my mother's grave" or "I swear by my soul." Some oaths assert or attest to the truth of what we declare. Other oaths signify that we'll abide by a certain promise which we make.

The Israelites were commanded to swear by God alone. In effect, their oath was a profession of faith in God. In the Hebrew Scriptures an oath was relatively rare, and certainly not something to be taken lightly. But by Jesus' time oaths were invoked routinely. People swore by various objects, but many times the oaths weren't even legally binding. It was difficult to tell which ones were binding or non-binding.

Matthew's passage today (5:21-37) presents Jesus as the Teacher: he speaks with new authority and not as the Scribes. He's depicted as the One who proclaims God's will as it was originally intended. Jesus is, so to speak, God's mouthpiece, the authentic interpreter of God's law. His word is more radical than Moses' word, even stands above it.

Jesus' attitude toward oaths, as reflected in Matthew, is to forbid them. Possibly his reply was to a question, such as: "Which oaths are binding or not binding?" Jesus points out the hypocrisy and deceitfulness of the questioner. Why would anyone ask this unless s/he condoned telling half-truths? In the reign of God, Jesus contends, there's no room for oaths. The truthful word of God's follower is all that's needed. God is as serious about the truth, all the time, as we're serious about it when we use a binding oath. In following Jesus, however, oaths become unnecessary: a simple "Yes" or "No" is binding enough. The truth stands on its own.

Unfortunately today, we run into folks who can't distinguish truth from untruth, reality from unreality. Many lie most of the time. We call them sociopathic or pathological liars. Hopefully, none of us acts in this way. But we've all been guilty, if we're honest, of being less than truthful at times. A friend gets a new hair-do or dress and asks if it looks good. We might say, "It's interesting," when we really mean that it looks horrible. Someone at the office asks your evaluation of a fellow worker, whom you know to be really incompetent, yet you answer, "Jim is a hard worker." And there are the endless "white lies" which we all tell: when we "don't have time" to help someone, or give them a lift, etc. If we're to follow Jesus faithfully, there's always need for greater truth in our lives. God's reign demands it. An honest relationship with God and with one another demands it.

Most of us can understand how untruth or lying harms, not only ourselves, but our family members and friends. But how does it also dishonor God? Perhaps the example of Lucy and Charlie Brown gives a clue. A lie tells another person that the world is different from the way that person perceives it. Like Charlie Brown, we recognize that the world includes untrustworthy people like Lucy. The lying or untruthful Lucys of the world, often our very selves, in essence verbally remake or try to remake the world. When I lie to you I try to make you live in the world which I "create", not the world as God created it. The untruthful person tries to assume God's authority and rule. The liar attempts to portray God's world, conceived in goodness, as other than it is.

In calling us to be servants of the coming reign of God, Jesus challenges us to be straightforward,  singleminded, honest: to "tell it like it is". Further, Jesus asks us to take him at his word: to have faith, to set our hearts and lives on his word, to live by it. Those who live by faith find it unnecessary to ask Jesus to swear that He loves us, "cross his heart and hope to die". Jesus doesn't need to say "hope to die": he did die for us. He said "Yes" to us and to new life, and "No" to death-dealing falsehood and duplicity.

In the inimitable words of Edith Ann, one of Lily Tomlin's characters which you may recall from years ago: "And that's the truth!"
Posted by Harry Allagree at 9:59 PM