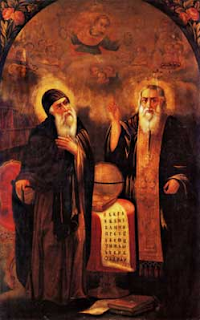 The Greek brothers were born into the Slavic speaking community of Thessaloniki in Macedonia. Constantine, a child prodigy, attended the Imperial University [University of Magnaura], studying grammar, rhetoric, mathematics, and philosophy under the leading teachers of the region, including Photius, who was became the Patriarch of Constantinople. Constantine was also adept at Arabic and Hebrew. Having been ordained a deacon, then 24, he assumed Photius' chair of philosophy at the Imperial University, as well taking charge of the huge library at Hagia Sophia. Living in a monastery on the Bosporus, he was widely known as a teacher, and, in some circles, as "The Philosopher". Methodius became governor of a Slavic-speaking district in Greek territory for a time, then, experiencing a call to monastic life, he left his post to join Constantine at his monastery.

Constantine's mastery of theology and command of both Arabic and Hebrew well qualified him for his first state mission by the Byzantine Emperor Michael III. He was sent to the Abbasid Caliph Al-Mutawakkil to discuss the principle of the Holy Trinity with Arab theologians, and to generally improve relations between the Caliphate and the Empire. In c. 860, Emperor Michael in Constantinople, along with Patriarch Photius, again called on Constantine, this time with Methodius also [although this is somewhat uncertain], to go to the land of the Khazars, north and west of the Black Sea (present day Russia and the Ukraine). This was a missionary expedition to the Khazar Khaganate in order to discourage the expansion of Judaism there, though unsuccessful, since the Khagan later imposed Judaism on his people as the national religion. There's a legend that Constantine and Methodius made a stop beforehand at Chersonesus in the Crimea to prepare for the upcoming mission, and that, according to tradition, Constantine discovered the relics of St. Clement of Rome during their stay there. That 200 Khazars were purportedly converted and baptized because of the brothers' work points to a successful mission. After the brothers returned to Constantinople, Methodius was elected abbot of a monastery.

The brothers spent their energy translating scriptural and liturgical texts into the Slavic language. Constantine also composed a totally new Slavonic alphabet, called the glagolithic. In it's final form it's known as the cyrillic alphabet, still used today by Orthodox Christians in Russia, the Ukraine, Belarus, Bulgaria, and Serbia. Constantine used glagolithic to translate the Psalms, the Gospels, and the epistles of St. Paul into Slavic.

In 862 Prince Rastislav of Moravia sent a request for missionaries to Emperor Michael noting: "Our nation is baptized and yet we have no teacher to guide and instruct us in interpreting the Sacred Scriptures. We understand neither Greek nor Latin. Furthermore, we do not understand written characters nor their meaning. Therefore, send us teachers who can make known to us the words of the Scriptures and their sense." (From The Russian Primary Chronicle) The Emperor once again chose to send Constantine and Methodius to Moravia in 863. Constantine told him: "I am weak and sick, but I am happy to go naked and barefoot and I am ready to die for the Christian faith."

The brothers worked under the support of the prince of Moravia: training the clergy, instructing the people in the Slavonic language, converting non-believers, confirming those who already were believers in the Christian faith, and translating liturgical books into the people's language. Their efforts weren't at all universally appreciated, particularly by nearby German clergy who objected on several counts: 1) they saw the brothers as intruders, considering Moravia under their jurisdiction; 2) they considered use of the "vulgar" Slavonic language in liturgy as blasphemous; and 3) they were generally suspicious of anyone from Constantinople! In 864 Louis the German conquered Moravia, and the Frankish clergy curtailed the brothers' activities. These people were what Constantine referred to as trilingualists, i.e., they believed that only Latin, Greek, and Hebrew were acceptable for use in worship, basing their belief on the inscription which hung over Jesus' head at the Crucifixion and identified him as "King of the Jews" in Latin, Greek, and Hebrew.

Constantine and Methodius traveled to Rome in 867, hoping to enlist the Pope's support for their work. By the time they reached Rome a new Pope, Adrian II, was in place. The Pope received the brothers cordially, especially since, according to legend, they'd brought him the relics of St. Clement of Rome. Adrian gave his approval to the Slavonic translations of both the Bible and the liturgy, and blessed the Slavonic books in a service at the altar of the Church of the Virgin. He likewise authorized the use of Slavonic in the Mass in several churches in Rome in which he installed Methodius and three of his disciples. Pope Adrian agreed to consecrate both Constantine and Methodius as bishops, and apparently this was done for Methodius, while it isn't clear, at least from the sources I've read, whether that was true for Constantine.

Constantine's worsening health prevented the brothers from returning to Moravia. He entered a monastery, was tonsured as a monk and took on the name "Cyril", just a month and a half before his death on February 14, 869. He died in Rome, and was buried with great pomp in the Church of St. Clement, whose relics he'd brought back from Crimea.

In the same year, 869, Methodius was consecrated as Archbishop of Sirmium in Moravia, and returned there with the Pope's recommendation. He arrived only to find that Prince Rastislav, who'd originally invited Methodius and his brother, had been overthrown by a nephew, Svátoplúk, who was in cahoots with the German clergy and bishops. In 870 Methodius was arrested, hailed before the synod of German bishops, and imprisoned. Three years later Pope John VIII was able to free him, but only on the condition that Slavonic, "a barbarous language", be used only for preaching. Methodius continued his work, but, having confronted the new prince for his moral failings, Methodius was recalled to Rome on charges of continuing to use Slavonic in the liturgy and for heresy because, following ancient tradition, he omitted the Filioque clause, "and the Son", from the Creed. Pope John summoned him to Rome and, finally satisfied with his orthodoxy, sent him back to Moravia, even authorizing the use of Slavonic in the liturgy, with certain reservations. Nevertheless, at Prince Svátoplúk's request, Pope John unwittingly consecrated a German priest, Wiching, as Methodius' suffragan bishop. Bishop Wiching did everything he could to make Methodius' life miserable, even to the extent of forging pontifical documents! Even after Methodius' death, Wiching made it his mission to try to undo all of Methodius' work.

Methodius eventually completed a Slavonic translation of the Scriptures, as well as of Byzantine ecclesiastical and civil law, while continuing his missionary activities. He died on April 6, 885. The chronicle records that at his funeral, celebrated in Greek, Latin, and Slavonic, "The people, carrying tapers, came together in huge numbers;...all were there. For Methodius had been all things to all people that he might lead them all to heaven."

You could say that SS. Cyril and Methodius, Eastern churchmen working in collaboration with the Western Pope, were among the first ecumenists. In recognition of this, Pope John Paul II, in 1981, proclaimed them joint patrons of Europe, together with St. Benedict of Nursia.

The heritage of liturgy in the vernacular left to Eastern Christendom by SS. Cyril and Methodius is of monumental importance. Orthodox churches commemorate St. Cyril on February 14th, St. Methodius on April 6th, and both brothers together on May 11th. The Episcopal Church also honors the saints on February 14. Catholic churches commemorate them together on July 7th.
Posted by Harry Allagree at 4:17 PM