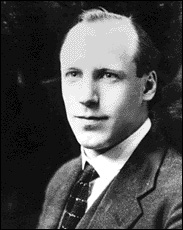 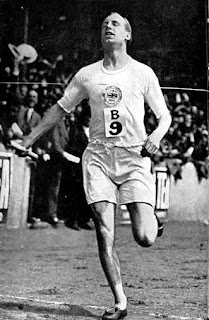 Remember the opening scene from the 1981 movie, Chariots of Fire? the winded track stars going for the finish line? the haunting musical theme by Vangelis? That movie was based on the story of Eric Liddell [rhymes with fiddle] (1902-1945), a Scotsman and second son of missionary parents, born in China. Liddell was schooled in England, then entered Edinburgh University where he excelled in athletics throughout his stay there.

Liddell won a spot on the British track and field team for the Paris Olympic games, Olympiad VIII, in 1924. He took a gold medal in the 400 meter, setting a world record, and won a bronze medal in the 200 meter. He was favored to win the gold in the 100 meter, his best event as a university athlete. The race, however, was scheduled for Sunday, and rather than break his commitment to keeping a weekly sabbath, even if it meant not participating, he opted out of the race.

Most people don't know that after he graduated from Edinburgh, Eric returned to North China to serve as a missionary himself, associated with the London Missionary Society, from 1925-1943. In 1932 he was ordained a minister, and two years later he married Florence Mackenzie, daughter of Canadian missionaries to China, with whom he had three daughters.

Because of the ongoing conflict between China and Japan, missionaries had to endure many hardships. When the British government advised expatriates to leave China in 1941, after Japan's invasion, Liddell's wife and children fled to Canada, but Eric and his brother, Rob, remained to continue the missionary work. Two years later Eric was captured by the Japanese and imprisoned in the Weihsien concentration camp. Many of those who survived the camp had fond memories of Liddell and spoke very highly of him.

One of these people was The Rev. Dr. Norman Cliff, who reflected on Liddell's last days in the camp, in a talk he gave in 1999: "As the months in Weihsien Camp went by, life became increasingly difficult. Inadequate nutrition month after month, kept within the confines of electrified wires: all these things began to take a toll on our lives. There were mental breakdowns; cases where workers collapsed at work, typhoid, malaria, and dysentery were prevalent among the prisoners. And with the war dragging on like this we wondered when it would end and if it does end who is going to win.


Morale began to go downhill and sports activities began to fizzle out and this general deterioration in health and morale also came to Eric Liddell. He was as human as the rest of us. He started getting severe headaches, he found glare and noise tiresome and he began to feel the separation from his family.


He tried to continue to be of service to fellow internees. Though the will was there, the energy was not. He began to confide in fellow missionaries of the London Missionary Society of his own struggles and fears, his loneliness, and his family. In January 1945 he was taken to the camp hospital...

...The singing and playing of...hymns gave us a tremendous boost. They reminded us that God had not forgotten us...One Sunday in mid-February 1945 we were playing at one of our usual spots just outside the camp hospital and while we were playing, a nurse sent out a note through the window, ‘Eric Liddell has asked if you would play Finlandia’. Of course our leader led us and we played for him...


...A few days after that Eric Liddell sat up in bed and wrote on a piece of paper to his wife, Florence, in Canada '… was carrying too much responsibility… had slight nervous breakdown… much better after a month in hospital. Special love to you and the children, Eric. After writing this over-optimistic note he said to his friend and colleague, Annie Buchan, 'It’s full surrender,' and he went into a coma from which he did not recover. Within an hour he had gone.


The funeral, a few days later, was crowded and the church could not hold all the people and many were standing outside. All kinds of people came who did not normally come to our Sunday services. There was, for example, a prostitute for whom Eric had done some chores without asking anything in return. Many internees were crowded inside and outside the church. And I was part of that cortège of those who carried the coffin down the road to a small cemetery in Japanese quarters..."
Posted by Harry Allagree at 9:31 PM