Courage In the "Day of Small Things" 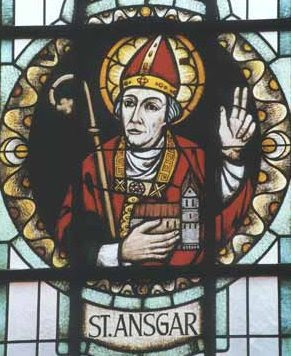 St. Anskar [Ansgarius/Ansgar] (c. 801-865) was one of the first missionaries to the notorious Vikings, though he was himself a native of Picardy. Nevertheless, he's highly honored today by Danish, Swedish and Norwegian descendants of the Vikings, particularly in Sweden where he's said to have established the first Christian church in the 830's.

Anskar was orphaned at age 4, upon the death of his mother, and sent to the Monastery of Corbie, near Amiens. At the tender age of 13 he made his monastic profession and was educated there. Apparently he showed outstanding teaching skills because he was chosen as master of the New Corbie monastery school in Saxon Germany when he was 21. For years even before this, however, Anskar had experienced the desire and call to be a missionary. As it turned out, it wasn't he who actively searched out missionary opportunities. Rather, according to his biographer and friend, Rimbert/Rembert, the call came from various civil leaders, first King Harold of Denmark, and later Emperor Louis and others.

In 826 Anskar was invited to come to Denmark by King Harold, who had met Anskar when he stopped at the monastery while returning from exile. Anskar was able to establish a school and a mission in Denmark, and became noted as a popular preacher and holy man. Around 829, at the invitation of King Björn, Anskar journeyed to a merchant settlement, Birka, located in what is now the country of Sweden. Here, along with his faithful companion, Rimbert, he established the first Swedish church on the property of Herigar, a man whom he had converted.

Soon after, in 831, the Emperor Louis, by his own authority, appointed Anskar as abbot of New Corbie Monastery, then named him and had him consecrated as the first archbishop of Hamburg in 832. He also traveled to Rome that same year, where Pope Gregory IV appointed him as the papal legate of all the Scandinavian countries. He worked tirelessly for the next 14 years at Hamburg, establishing missions, building churches and libraries, in North Germany, Denmark, Sweden and Norway.

The Vikings overran the Scandinavian countries in 845, essentially decimating Hamburg and all that Anskar had: his church, monastery, library, etc. He transferred his operation to Bremen, over which the Pope also appointed him bishop, and continued his missionary efforts from there for the next 20 years.

The thing that particularly intrigues me about the feast of St. Anskar is the Collect for the day: "Almighty and everlasting God, you sent your servant Anskar as an apostle to the people of Scandinavia, and enabled him to lay a firm foundation for their conversion, though he did not see the results of his labors: Keep your Church from discouragement in the day of small things, knowing that when you have begun a good work you will bring it to a fruitful conclusion; through Jesus Christ our Lord, who lives and reigns with you and the Holy Spirit, one God, for ever and ever. Amen."
Most of us don't ever really see the results of our efforts. How easy it is to become discouraged when trying to live according to the Gospel each day. We lose sight of the fact that, after all, it's God's whose work is given to us and God who oversees the outcome and any "fruitful conclusion". Anskar had every human reason to gripe and complain and bemoan all his unappreciated years of missionizing people who didn't seem very open to it. Yet he courageously persisted "in the day of small things".

Rimbert writes this in his biography of Anskar: "...it is clear that there are two kinds of martyrdom: one occurs when the Church is at peace and is hidden from sight; the other occurs during times of persecution and is visible to all. Anskar desired both kinds of martyrdom, but in the end only attained one. For day after day, with tears, vigils, fasts, disciplining the flesh and mortifying his bodily desires, he offered up to God a sacrifice on the altar of his heart, and in so doing attained a martyrdom as far as is possible in a time of peace...He was indeed a martyr because the word 'martyr' means 'witness'. and he was a witness of God's word and of the name of Christ..."
Posted by Harry Allagree at 1:31 PM