My Very Own Feast Day 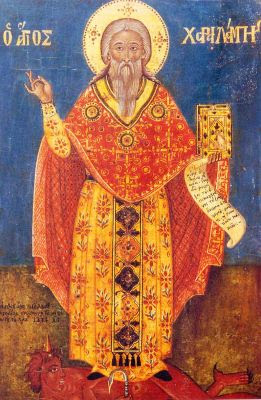 Sometime over 15 years ago, a parishioner friend at my former parish, St. John's, Chico, Anita Psyllos, had visited Greece and returned with a wonderful gift for me: an icon of a saint whom she said was "St. Haraldobus". She'd asked around for one fitting my first name, "Harry". [Parenthetically, I've deferentially have tolerated my name, not particularly liking it, though I was close to my maternal grandfather for whom I was named.] Since at least high school, I simply accepted that "Harry" was a derivative of "Henry", which it is; also of "Harold", which is not my name. When I was ordained, the official papers recorded my name, in Latin, as "Henricus". Though Anita's icon has hung on my wall since then, and though I continued to call him "Haraldobus", some months ago I decided to search online for the feast day corresponding to "Harry".

My online search took me to an entry on Wikipedia for St. Charalampos/Harálampos = χαραλαμπος = joyful light. Another variation is Harálambos, which may be what Anita had originally been told in Greece. Interesting, too, that my last name is "Allagree" = allègre (Fr.), lively, cheerful; alegre (Sp.), joyful, glad. But then, I do recall one of my seminary English instructors, Fr. Francis Kinney, calling me "Happy Harry"! He also nicknamed me "Butterball", but we won't pursue that one! At any rate, the feast of St. Haralampos (c, 89-202) is observed today, February 10.

St. Haralampos seems to have been an early Christian priest or bishop in Magnesia, a region of Thessaly, in the diocese of the same name. He lived during the reign of Septimius Severus (193-211), when Lucian was Proconsul of Magnesia. It is believed that at the time of his martyrdom, Haralampos was 113 years old. Let's hope that I have some of his spiritual genes at least!

Haralampos was at least a priest, possibly the Bishop, at Magnesia, and spread the Gospel in that region for many years. When the acclaim of his preaching reached Lucian, the proconsul in the area, and the military commander, Lucius, Harlampos was arrested and brought to trial, where he confessed his faith in Christ and refused to offer sacrifice to idols. Despite his advanced age, he was tortured mercilessly, his body lacerated with iron hooks, and skin scraped from his body. His only comment to his tormentors was: "Thank you, my brothers, for scraping off the old body and renewing my soul for new and eternal life." Legend has it that, upon witnessing Haralampos' endurance of such tortures, two soldiers, Porphyrius and Baptus, openly confessed faith in Christ, for which they were immediately beheaded. Three women who were also watching the sufferings of Haralampos began to glorify Christ, and were summarily executed as well.

Hagiographers of the saint claim that Lucius, enraged by all this, seized the instruments of torture himself and began to torture Haralampos, only to have his forearms suddenly cut off as if by a sword. The governor Lucian then spat in the face of the saint, and immediately Lucian's head swivelled around, so that he faced backwards! Yes, you can read it all in the acta of Haralampos' martyrdom! A further note says that, surpisingly, Lucian and Lucius both experienced a dramatic conversion. They prayed for mercy, were healed through Haralampos' intercession, and became Christians themselves. Well...who knows?!

But apparently that wasn't the end of it. Even more tortures, according to the legend, were inflicted on St. Haralampos after he was brought before Septimius Severus himself. After being condemned to death and led to the place of execution, Haralampos lifted his arms to heaven and prayed: "Lord, You know that humans are flesh and blood; forgive them their sins and pour out Your blessing on all." Haralampos then gave up his soul to God even before the executioner had laid the sword to his neck. Pretty tough ole codger, at 113! According to tradition Severus' own daughter, Gallina, was also so moved by the death of Haralampos, that she was converted, and saw to it herself that Haralampos was buried.

The skull of St. Haralampos is kept at the Monastery of St. Stephen at Meteora in Greece. Many miracles are traditionally attributed to the fragments of his relics, found in many places throughout Greece and elsewhere. These miracles have made Haralampos, the most aged of all the martyrs, especially dear to the people of Greece.
Posted by Harry Allagree at 1:23 PM