"In Much Fear and Trembling" 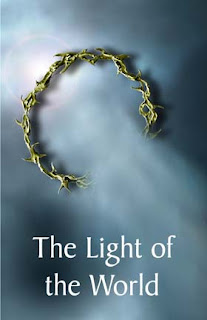 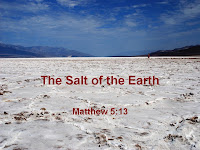 Three phrases jump out from the Epistle (1 Corinthians 2:1-16) and Gospel (Matthew 5-13-20) for this Sunday, Epiphany 5: 1) "fear and trembling; 2) "the salt of the earth"; 3) "the light of the world". The first one conjures up in my mind a well-worn joke which tells of a Jewish rabbi, a Roman Catholic priest, and an Episcopalian traveling together on a jetliner. In midair the plane suddenly drops some 1000 ft. within a few seconds, then stabilizes, and eventually lands safely. The news of the incident has preceded them to their destination, and a local news reporter is waiting at the gate to interview them and get their reactions to what happened. The Jewish rabbi explains that he prayed fervently to the God of Abraham, Isaac, and Jacob. The Roman priest tells the reporter that he prayed with almost equal gusto to the Blessed Virgin Mary to intercede with the Lord. "And to which denomination do you belong?" the reporter asks the third man. "I'm an E...copalian: I was an Episcopalian when I boarded the flight, but when the plane fell 1000 ft. in five seconds, that which is between the 'E' and the 'copalian' was sacred out of me, and now I'm an E...copalian!"

The passage from Paul's letter to the Corinthian community is particularly rich theologically and quite touching. "When I came to you, brothers and sisters, I did not come proclaiming to you the testimony of God in lofty words or wisdom. For I decided to know nothing among you except Jesus Christ and him crucified. And I was with you in weakness and in much fear and trembling..." One would have to look hard to find a more eloquent expression of humility, as well as an accurate summary and personal confession of Christian faith. For Paul, the vehicle for expressing such a deep reality was something far beyond any human "speech" or "message" or "plausible words of wisdom". For him only a "demonstration of the Spirit and of power" would do, in order that "your faith  might...rest...in the power of God."

None of the "rulers of this age" comprehend this. The powers that be in every age simply don't operate in that "universe" or according to those categories. The very fact that Jesus, "the Lord of glory", was crucified, murdered, in the way that he was is evidence of this. Paul then makes an astounding statement: that"'what no eye has seen, nor ear heard, nor the heart of man conceived, what God has prepared for those who love him', God has revealed to us through the Spirit...Now we have received...the Spirit which is from God, that we might understand the gifts bestowed on us by God. And we impart this in words not taught by human wisdom but taught by the Spirit, interpreting spiritual truths to those who possess the Spirit..."

In other words, sent to this community of believers in Jesus, Paul comes embodying in his person lowliness, weakness, inadequacy, yet also firm in the conviction that, by the power of the Spirit of Jesus, given as sheer gift from the Father, he, Paul, also embodies in his person an understanding of God's gift of "a secret and hidden wisdom", which he's passing on to them whose hearts have been open enough to receive and possess that same Spirit of power. They now, and this is where today's Epistle and Gospel connect, become "salt of the earth", "light to the world", embodying the same gift in themselves, called and commissioned to share it with those around them. To the powers that be and to those who fail to grasp this, these realities are the utmost "folly".

In this passage, Paul uses the word "wisdom" some six times. Scholars and theologians through the centuries, among them some of the great Russian writers and, of course, Thomas Merton in our own time, have sought to comprehend the meaning of "Holy Wisdom". Christopher Pramuk, in his recent book Sophia: The Hidden Christ of Thomas Merton, has provided, to my mind, one of the clearest synopses of that term.  He says: "Who then is Hagia Sophia [Holy Wisdom]? She is the Spirit of Christ but more than Christ. She is the Love joining the Father, Son, and Spirit that longs for incarnation from before the very beginning. She is Jesus our mother, and Mary, the Theotokos. She is the 'pivot' (le point vierge) of nature, Natura naturans, and all creation in God from the beginning. Perhaps most of all, Merton's Sophia is our 'true self', when we (like Mary, seat of Wisdom) allow Christ to be birthed in us, and so realize the hidden ground of mercy, creativity, and presence in our very selves, the mystical Body of Christ..."

Paul understood, by the Spirit's enlightening, that Jesus' passion and death embodies a mystery which can be approached only in the realm of paradox, as a reality which Merton terms "negatively positive". In his Contemplation In a World of Action, Merton says that we must approach the cross "humbly and resolutely, following the call of God and obedient to the divine Spirit, like Moses approaching the burning bush, removing the 'shoes' of opinion and rationalization." In the ongoing act of creation God's Self-giving is both Self-emptying and Life-giving. Jesus, too, is non-violent "even to death on a cross", reconciling humans with God and with one another, ever inviting them to repent and change, asking forgiveness even for the very ones who killed him. In Merton's words, "Love cannot come of emptiness. It is full of reality."(Emblems of a Season of Fury)

Matthew's Jesus speaks of his disciples as "salt of the earth" and "light of the world". He makes clear that if the salt is flat, it's useless. There needs to be new salt. And if you're hiding your light from others, for whatever reason, you're violating the nature of light. Under normal circumstances, for example, it's impossible for an inhabited city on a hill to be hidden: you can see it in daylight and the lights at night give it away. Likewise, you don't light a lamp, then try to keep it hidden, but you elevate it so that the light can pervade the surrounding area. So with the disciples: if people can't see the "light" of good works embodied in you, the Father's free and lavish gifts, which those good works are, won't be celebrated and held up for imitation. In fact, their lack will put shame back on the Father.

Living according to the "spiritual wisdom" which Paul talks about is the real "Law of Christ", not human regulations or expectations. We who have been given the gifts of God's Wisdom must do and teach, else we can never claim to be participants in the reign of God in Christ.

The issues with which the Scriptures today challenge you and me are truly profound, if you think about them. Who wouldn't experience some semblance of "fear and trembling", mostly because we may begin to plumb the depths of the vast chasm between the Divine and us? We become vividly aware of how unequal to the task we might be. Sometimes, too, we're fearful simply that God may ask something of us, and we're fearful at what or how much God might ask.

Daniel Evans writes this about fear:
"It's so easy to be afraid, to be made afraid. Once it has happened, we find it difficult to ease back into the confidence that cancels fear and its power...

My little boy staggers to my bedside in the middle of the night, crying. A dream, a noise, a shadow has awakened him and awakened fear in him. I say 'Don't be afraid: it won't hurt you.' But I wonder if he believes me. I lead him back into the dark room, and the lonely bed seems so far away from mine. Can I love away the noise, the shadow, the dream in those silent, sleepy moments? Can I love the fear away?

When shall we awaken to the knowledge that that is what God has done for us? God has met us in the awful night. God wraps us in sympathizing love and assures us that we can trust the love of the Eternal more than all the darkness."
Posted by Harry Allagree at 3:20 PM